A few months ago The Fella and I were visiting my Cousin and her family for dinner.  My Cousin served a vegetable and potato kugel as a side dish.  Unbelievably, I had never had kugel before.  I fell in L-O-V-E with this kugel.  My cousin was so nonchalant.  Kugel was nothing special, an everyday dish in her mind.  But to me, a new delight had been discovered!  She shared her recipe with me which is really a recipe for potato kugel with vegetables substituting some of the potatoes.  I adapted her recipe to use sweet potatoes in place of white potatoes, but I kept the basic structure of her recipe the same.  I also did a little research on kugel and found that savory is not the traditional vibe for kugel.  Most kugels seem to be made with noodles and fruit.  I’m not sure how I feel about that.  I may have to taste a noodle kugel before I try making it myself. 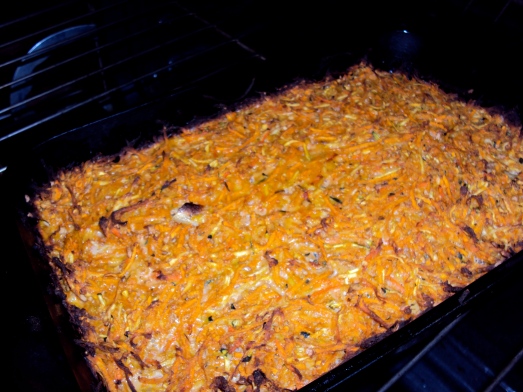